Trump Wants to Cut Federal Regulations ‘Below the 1960 Level’

[ThinkProgress.org] - Before cutting a red ribbon with oversized scissors Thursday afternoon, President Donald Trump touted his administration’s progress in cutting regulations, saying he wants to return the federal government to the level of regulations that existed in 1960.

Over the past 11 months, the Trump administration has canceled or delayed more than 1,500 planned regulatory actions, “more than any previous president, by far,” the president said at a White House event.

“We’re going to cut a ribbon because we’re getting back below the 1960 level and we’ll be there fairly quickly,” he said.

A progress update on the administration’s regulatory rollback was contained in the semi-annual Unified Regulatory Agenda published by the White House Office of Management and Budget Thursday afternoon.

Read more »
Posted by magiclougie at 9:35 PM No comments:

The group sent the messages across Telegram with the titles of “Wait for us” and “ISIS in Manhattan,” plus pictures of Times Square and a “bomb belt and detonator,” Reuters reported.

"We will do more ops in your land, until the final hour and we will burn you with the flames of war which you started in Iraq, Yemen, Libya and Syria and Afghan. Just you wait," one of the messages read.

Another message cited the Trump administration’s proclamation last week regarding Jerusalem, the holy city that is important to Jews, Muslims and Christians and of critical importance in any negotiations for a Middle East peace deal.

Protesters shout anti-American slogans in response to President Donald Trump's recognition of Jerusalem as Israel's capital, during a protest in Lahore, Pakistan, on December 13. The banner reads. "Curse, curse, curse. Every Anti-Islam step of the United States." REUTERS/MOHSIN RAZA

The threats, which ISIS has made before, came after a man injured five people in a walkway in New York’s Port Authority bus terminal Tuesday with a pipe bomb. The suspect, Akayed Ullah, 27, reportedly pledged allegiance to ISIS before the attempted attack and had a second device on his person that officials have yet to describe, according to CNN.

While he may have pledged to ISIS, there was no indication Ullah had any contact with the militant group.

ISIS has been largely driven out of Iraq and Syria, but it still has the capability to carry out strikes around the globe. The group reportedly claimed it conducted 38 operations in 19 countries between October 2016 and September 2017—or year 1438 in the Islamic calendar.

Though leaders across the Middle East told him the Jerusalem decision could spark violence and outrage, Trump kept a key campaign promise last week when he ordered the U.S. Embassy in Tel Aviv moved. He said the recognition of Jerusalem as Israel’s capital was “a long overdue step to advance the peace process.”

Trump also said the move was a different approach from that of previous administrations, which had failed to produce a lasting peace in the often volatile region.

“It would be folly to assume that repeating the exact same formula would now produce a different or better result,” Trump said.

However, the embassy’s move is expected to take a minimum of three years. Secretary of State Rex Tillerson said Tuesday the transition could take place as late as 2020, adding that even that estimate was “ambitious.”

“It’s not going to be anything that happens right away,” Tillerson said. “Probably no earlier than three years out, and that’s pretty ambitious.”


Posted by magiclougie at 11:36 AM No comments: 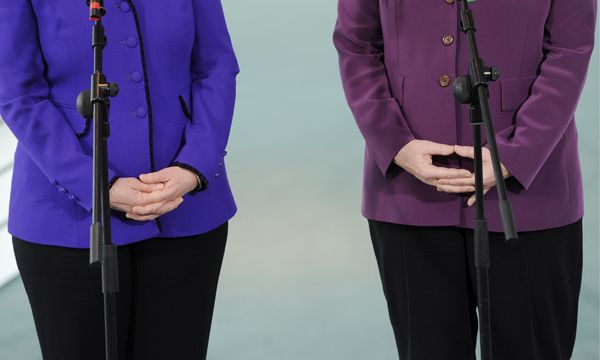 [Global Research] - Back in September when the travelling press corps asked Hillary Clinton who her favourite world leader was, she was quick to name German Chancellor Angela Merkel as her top choice — for good reasons. As Clinton was praising Merkel, the German government was busy syphoning millions to the Clintons.

Between July and September 2016, unwitting German taxpayers gave as much as $5 million to the Clinton Foundation, Germany newspaper Die Welt reveals. Die Welt asked if Chancellor Merkel was trying to influence the outcome of U.S. presidential election.

[The Ticket] - It's no secret Hillary Clinton loves a good pantsuit.

Clinton, who possesses them in virtually every color of the rainbow, has made suits her fashion uniform of choice during her time in the public eye. And so prior to yesterday's state dinner, German Chancellor Angela Merkel, who is herself a pantsuit fan, poked some gentle fun at the Secretary of State's wardrobe, via an unusual gift--taking care to tell Clinton that "you may take it in a playful mode."

When they met on Tuesday, Merkel presented Clinton with a framed copy of the Frankfurter Allgemeine newspaper featuring an Associated Press photo of the two leaders during the Secretary of State's visit to Germany this past April.

The photo was of Clinton and Merkel, in their signature pantsuits, captured from the waist down and featured the caption, "Which one is Merkel and which one is Clinton?" The following page of the paper revealed the full photo--which Merkel included on the back of the framed gift she presented to Clinton Tuesday.

Upon seeing the photo, Clinton, who has frequently joked about her love of pantsuits, hooted with laughter.

You can see more photos of Clinton and Merkel below, including the photo that started it all.

Read more »
Posted by magiclougie at 6:46 PM No comments:

Labels: Angela Merkel, Germany as the Next World Superpower, Hillary Clinton, Hitler, Presidents of US are Related

The Palestinian envoy to Britain calls Trump's change on Jerusalem policy 'a kiss of death to the two-state solution,' while the Pope and Mideast countries express acute concern 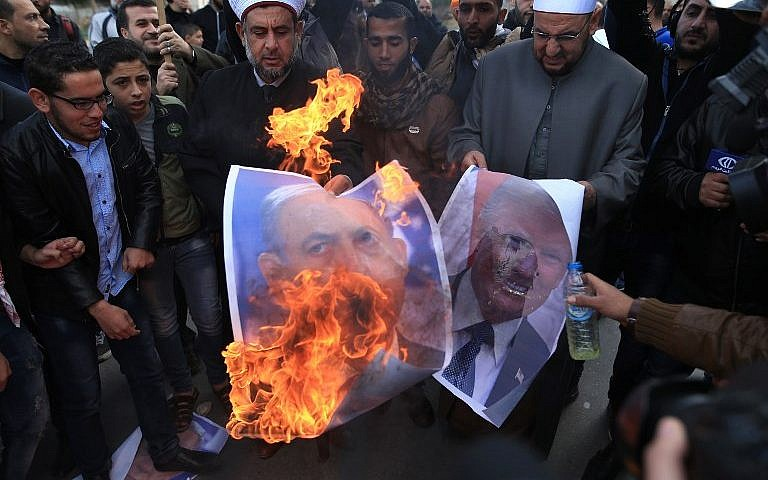 (Reuters and The Associated Press) -  U.S. President Donald Trump would effectively be making a declaration of war if he recognizes Jerusalem as Israel's capital, the Palestinians' chief representative to Britain said on Wednesday.

"If he says what he is intending to say about Jerusalem being the capital of Israel, it means a kiss of death to the two state solution," Manuel Hassassian said in a BBC radio interview.

"He is declaring war in the Middle East, he is declaring war against 1.5 billion Muslims (and) hundreds of millions of Christians that are not going to accept the holy shrines to be totally under the hegemony of Israel," Hassassian added.

On Wednesday, hundreds of Palestinians gathered on the streets of Gaza City to protest Trump's announcement. The demonstration was organized by different Palestinian factions and militant groups which called for Palestinian unity in response to Trump's expected announcement.

They also waved Palestinian flags and banners proclaiming Jerusalem as "our eternal capital" and calling it a "red line."

Hamas official Salah Bardawil said the Palestinians were "on a dangerous crossroad today; we either remain or perish." He added that "Trump or anyone thinking that our people, nation and resistance are unable to push back his plans is wrong."

Hamas' politburo chief Ismail Haniyeh told Al-Jazeera TV that "our Palestinian people will have a suitable response. As a people, we cannot accept this American pattern."

In the meantime, Britain itself expressed concern over the change in American policy on Jerusalem, with Foreign Secretary Boris Johnson saying: "We view reports that we've heard with concern."

He told reporters at NATO headquarters in Brussels on Wednesday that Britain thinks "Jerusalem obviously should be part of the final settlement between the Israelis and the Palestinians — a negotiated settlement that we want to see."

Johnson added: "We have no plans ourselves to move our embassy."

Also on Wednesday, the Turkish presidential spokesman declared that the Organization of Islamic Cooperation will meet on December 13 to coordinate a joint response on Trump's Jerusalem move.

Prime Minister Binali Yildirim spoke about the possibility at a news conference with South Korean officials in Seoul. Yildirim said it was vital for the Middle Eastern region and for global peace that Trump not make such an announcement.

The prime minister added that a declaration could cause religious clashes and destroy efforts toward formation of a Palestinian state.

The Turkish Foreign Minister, Mevlut Cavusoglu, claimed that the "whole world is against" President Donald Trump's move. Moving the embassy to Jerusalem would be a "grave mistake," he added.

In Lebanon, two leading newspapers issued front page rebukes to President Trump, with An-Nahar comparing the American president to the late British Foreign Secretary Arthur Balfour, who a hundred years ago famously promised Palestine as a national home to the Jewish People, in what is known as the Balfour declaration.

The English-language Daily Star newspaper has published a full-page photo of Old City of Jerusalem capped by the Dome of the Rock beneath the headline: "No offense Mr. President, Jerusalem is the capital of PALESTINE."

Senior U.S. officials said on Tuesday that Trump will recognize Jerusalem as Israel's capital on Wednesday and set in motion the relocation of the U.S. embassy to the city.

Posted by magiclougie at 4:36 PM No comments: