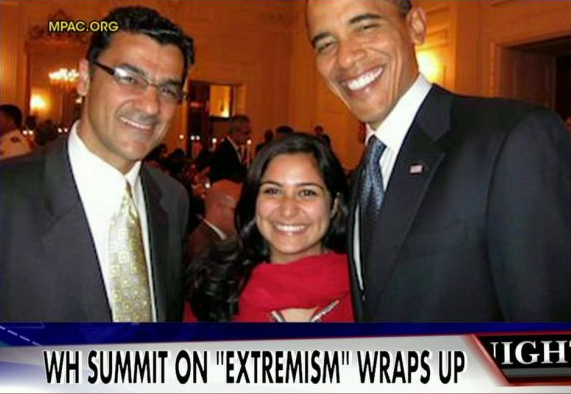 Fox News - Many moderate Muslims were invited to this week's White House summit on violent extremism. But one particular invitee raised some eyebrows, as critics pointed out that he had once suggested Israel should be on the "suspect list" for the 9/11 attacks.

Salam Al-Marayati, founder of the Muslim Public Affairs Council (MPAC), has since apologized for saying that, but he has expressed many other harsh anti-Israel views over the years.


Andy McCarthy of National Review argued that MPAC is far from a moderate organization and laid out Marayati's support for Hamas and Hezbollah:


Marayati first came to public attention in the late Nineties, when the Democrats’ then-leader in the House, Richard Gephardt, nominated him to serve on the National Commission on Terrorism — a nomination that Gephardt later withdrew when it emerged that Marayati had spoken sympathetically of violent jihad. In 1993, for example, Marayati had proclaimed, “When Patrick Henry said, ‘Give me liberty or give me death,’ that statement epitomized jihad.” Equally absurdly, he later analogized Islamic terrorists to “American freedom fighters hundreds of years ago [who] were also regarded as terrorists by the British.” Obviously, as Pipes observed, Marayati’s intent was “to render jihad and terrorism acceptable to Americans.”

While Democrats had hoped to raise Marayati’s profile, the exposition of his track record raised too many questions about his judgment. That problem intensified as the record became better known. In 1996, for instance, a Palestinian terrorist named Muhammad Hamida plowed his car into a crowded Jerusalem bus stop, killing one Israeli and injuring 23 others as he screamed “Allahu Akbar!” He was shot on the scene, before he could do any more harm. Immediately afterwards, while mum on the jihadist’s atrocity, Marayati demanded that the shooters of the jihadist be extradited to the United States to face trial on “terrorism charges” for this “provocative act.”

Meanwhile, in a 1999 PBS interview, Marayati portrayed Hezbollah attacks as “legitimate resistance” — a position that dovetailed perfectly with the sentiments of MPAC’s founders. In fact, in a position paper published around the same time, MPAC minimized Hezbollah’s murder of 241 U.S. military personnel in the 1983 terrorist suicide bombing of the Marine barracks in Lebanon: “This attack, for all the pain it caused, was not in a strict sense a terrorist operation. It was a military operation, producing no civilian casualties — exactly the kind of attack that Americans might have lauded had it been directed against Washington’s enemies.”


"How does this guy get invited to a summit like this?" she asked.

Thiessen said it's "mind-boggling" that Marayati would be invited, while President Obama won't invite Israeli Prime Minister Benjamin Netanyahu to the White House.


"How does this happen? I thought this was a conference fighting extremism, not giving it a platform," he said.

Kelly pointed out that MPAC also worked at times with the Bush administration, but that there are still many examples of his "incendiary rhetoric."

Hannah said Marayati said "stupid things in the past," but called MPAC a group that always speaks out against terrorist attacks. Hannah said MPAC has also worked with the Justice Department and local law enforcement.


"If we try to alienate this group, who are our allies?" Hannah asked.

Posted by magiclougie at 2:26 PM