New York Times — House Republicans on Friday rolled out what they called historic cuts in federal spending after conservatives in the party’s new majority demanded that the leadership follow through on a pledge to carve $100 billion from the current year’s budget.

The spending bill, put forward by the Appropriations Committee for consideration on the floor next week, proposes slashing a wide portfolio of domestic programs and foreign aid. It blocks the spending of about $2 billion in unused economic stimulus money and seeks to prevent the Internal Revenue Service from enforcing the new health care law. The measure also cuts financing directly from the office of the president.

Republicans take aim at some of their favorite targets in the measure, reducing financing to the Environmental Protection Agency by $3 billion — an almost 30 percent cut from current levels. The measure would also block the agency from implementing new emissions regulations, and it would cut more than $100 million in spending on climate change programs.

Housing, energy and transportation spending is also trimmed substantially. Dozens of programs, including the Corporation for Public Broadcasting, are eliminated.

“These were hard decisions, and I know many people will not be happy with everything we’ve proposed in this package,” Representative Hal Rogers, the Kentucky Republican who is chairman of the Appropriations Committee, said in a statement Friday night. “That’s understandable and not unexpected, but I believe these reductions are necessary to show that we are serious about returning our nation to a sustainable financial path.”

The bill, which allocates spending through the end of the fiscal year on Sept. 30, will run into stiff opposition from Senate Democrats, who warned that Republicans were on a dangerous path to a potential shutdown of the federal government. The Democrats are urging a more measured approach, along the lines of a five-year freeze at 2010 levels for many programs advocated by President Obama in his State of the Union address.

“The priorities identified in this proposal for some of the largest cuts — environmental protection, health care, energy, science and law enforcement — are essential to the current and future well-being of our economy and communities across the country,” said Senator Daniel K. Inouye, Democrat of Hawaii and chairman of the Senate Appropriations Committee. “Such an approach would knock the legs out from under our nascent economic recovery, kill jobs and do virtually nothing to address the long-term fiscal crisis facing our country.”

Were the Republican cuts to be enacted in full, they would reverberate throughout the operations of federal agencies, and represent one of the largest efforts to reverse the outflow of federal dollars in modern times.

“It is not going to be pretty,” said Representative Mike Simpson, Republican of Idaho and the chairman of an appropriations subcommittee that finances the Interior Department and other agencies. He said his committee had tried to be selective in reaching its goal.

“Obviously we don’t want to close the national parks and some other things,” he said. “There are areas where we can find reductions, which we’ve done. Are all of those acceptable to everybody? I don’t know.”

Democrats warned that Republicans were proposing unacceptable reductions with time running short before a March 4 deadline when the stopgap measure now financing the federal government runs out. Democrats said a stalemate would lead to a government shutdown like the one in 1995 that followed a face-off between Congressional Republicans and the Clinton administration.

“We know cutting is necessary; the question is what are we going to cut,” the Senate majority leader, Harry Reid of Nevada, told reporters on a conference call. “We cannot use a meat ax, and that’s what they are doing.”

Mr. Reid declined to specify an amount that Democrats would be willing to slice from federal spending this year, but he also chastised Republicans for struggling to agree on such a number among themselves.

Senator Charles E. Schumer of New York, the No. 3 Democrat, said Republicans had boxed themselves in by specifying a target for cuts without first identifying how to carry out the reductions.

“The trouble they’re having is that they seem to have a number in their head but not where the cuts come from,” Mr. Schumer said. “And so when they try to implement their number, it doesn’t work.”

House leaders had initially proposed a smaller level of reductions in domestic spending and foreign aid amounting to about $32 billion through Sept. 30. Republicans said those cuts, prorated for the balance of the fiscal year, would have fulfilled their campaign pledge to cut $100 billion from Mr. Obama’s budget request, which was never enacted.

But Republicans who campaigned on the $100 billion figure balked, forcing the Appropriations Committee back to the drawing board. The new cuts will total about $60 billion, and the plan appeared to be winning support from the conservative rank and file.

The Republicans had given themselves an extraordinarily difficult task by promising ahead of the November elections to exclude military and domestic security spending from their reductions. Roughly two-thirds of federal spending is for Social Security, Medicare and interest on the debt, and therefore are outside the control of lawmakers looking to exact immediate cuts. Pentagon and security spending further narrowed the portion of the federal budget headed for the chopping block.

Wall Street Journal - House Republican leaders on Thursday proposed cutting more than $30 billion from government spending for the remaining eight months of the fiscal year. Their approach could mean big reductions for virtually all federal agencies other than the Pentagon.

The GOP plan calls for a 9% reduction in nondefense, discretionary spending, a cut of $43 billion compared with 2010 levels. Defense spending would see a boost of 1%, or $8 billion.

That is a direct challenge to President Barack Obama's argument against deep and immediate spending cuts, which Democrats believe would harm the fledgling economic recovery. Republicans say the greater risk is in failing to move quickly to rein in the federal deficit.

"Washington's spending spree is over," said House Budget Committee Chairman Paul Ryan of Wisconsin, who was charged by GOP leaders with setting the spending-cut target.

The House Appropriations Committee will now write a bill specifying which agencies will be cut to meet the target. On Thursday, the panel said the biggest reductions would be made to transportation and housing programs, which would be cut 17% from 2010 appropriated amounts. Commerce and Justice programs would be cut by 16% and agriculture programs by 14%. The panel is still working out its proposals in more detail.

"These cuts will not be easy, they will be broad and deep, they will affect every congressional district," said Appropriations Committee Chairman Hal Rogers (R., Ky.).

The GOP leaders' plan was a disappointment to the party's conservative wing, which had petitioned House Speaker John Boehner of Ohio to make $100 billion of cuts this year, in keeping with the party's 2010 campaign promises. Republican aides said the leadership plan would provide $74 billion less than what Mr. Obama had requested for this year, a request that was not enacted.

"Many House members want to see at least $100 billion in nonsecurity savings this fiscal year and will offer amendments to get there if necessary," said Brian Straessle, spokesman for the Republican Study Committee, a conservative group that includes about two-thirds of Republican House members.

Leadership aides said a reduction below their $100 billion target was warranted because the budget year is already nearly half over. They promise to make further cuts next year.

The bill must also clear the Senate, where Democrats are in the majority and are unlikely to cut spending as deeply.

Democrats warn that if Republicans refuse to compromise, there is the risk of a government shutdown. But GOP leaders say they don't expect the situation to come to that. If a compromise isn't reached by March 4, another short-term funding bill is expected to be passed.

But Democrats are already signaling resignation to accepting some cuts.

The fight over the budget for fiscal 2011, which began Oct. 1, still rages because Congress last year passed only temporary measures to finance the government through March 4.

Mr. Obama, in his state of the Union address, called for a long-term effort to reduce the deficit but warned against immediate spending cuts while the economy was still fragile. He instead proposed a five-year extension of discretionary spending at 2010 levels, at $1.091 trillion annually. The new GOP plan, by contrast, would cap discretionary spending for this year at $1.055 trillion. The caps exclude outlays for Social Security, Medicare and other entitlement programs.

The GOP's proposed $8 billion boost in defense spending may not please the Pentagon leadership. Defense Secretary Robert Gates has complained that defense spending under the current stop-gap measure is a projected $23 billion below the president's request for 2011, which he said would hurt military training and readiness. 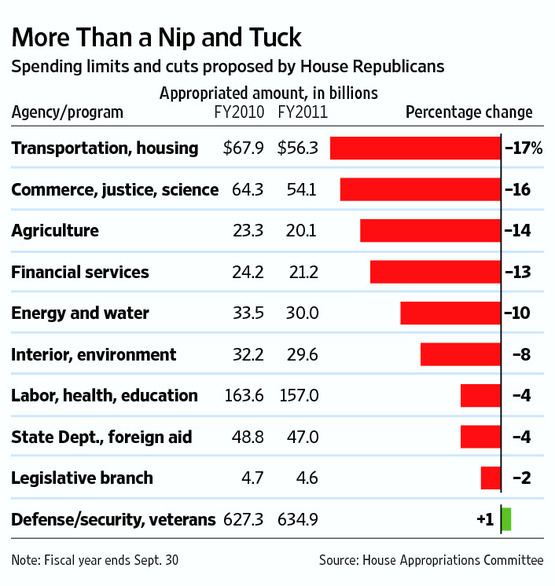 Labels: Government Corruption and Treason, Reduce the Size and Power of the Feds